Keeping up with the pace of change in the offshore software development industry can be a challenge. Pricing changes rapidly, teams shift focus to new technologies, and traditional powerhouses face competition from up-and-coming regions.

To help you stay on top of the latest trends, SourceSeek pulls data from our vast network of top-tier offshore development teams from across the globe. The results are a guide that provides all the information needed to optimize your offshore software development strategy and results. 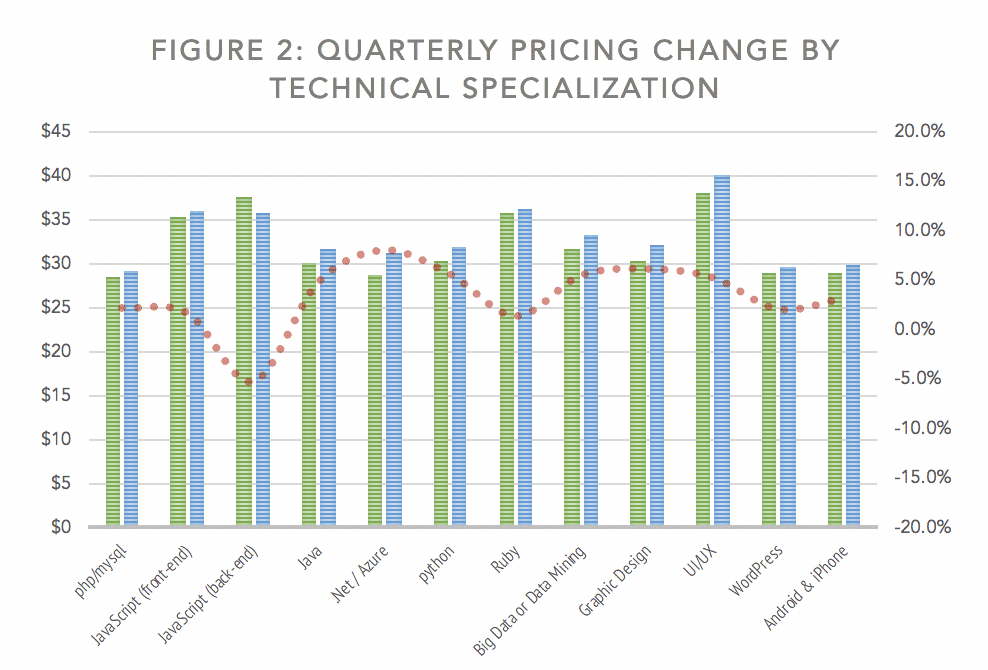 Our Take:  The last several years has seen an apparent explosion of interest in demand for back-end JavaScript developers. The perceived increase in demand has led to a huge surge in teams advertising back-end JavaScript skills. In fact, SourceSeek has seen the number of vendors in our network claiming an expertise in back-end JavaScript explode. In just 12 months, it has increased from 123 to 209, a 70% annual increase. However, it seems teams over estimated demand, and the over-supply of teams is driving down prices.

Our Take:  At SourceSeek, we have consistently seen that whenever there is an offshore software development industry darling like ruby, node, JavaScript, etc. there is a big jump in companies offering that language. That initial rush to attract clients with a sexy new technology is typically followed by a market correction. Demand plateaus and the actual utility/value of the technology establishes itself. After that, both clients and vendors ‘go back’ to the new normal distribution of technologies offered. For example, last year there was an explosion of people wanting react developers. However that craze seems to have ended. Instead, there now appears to be a bit of a bump in demand for angular (which was the most popular framework before react got crazy). We believe this is what has happened with .Net teams. 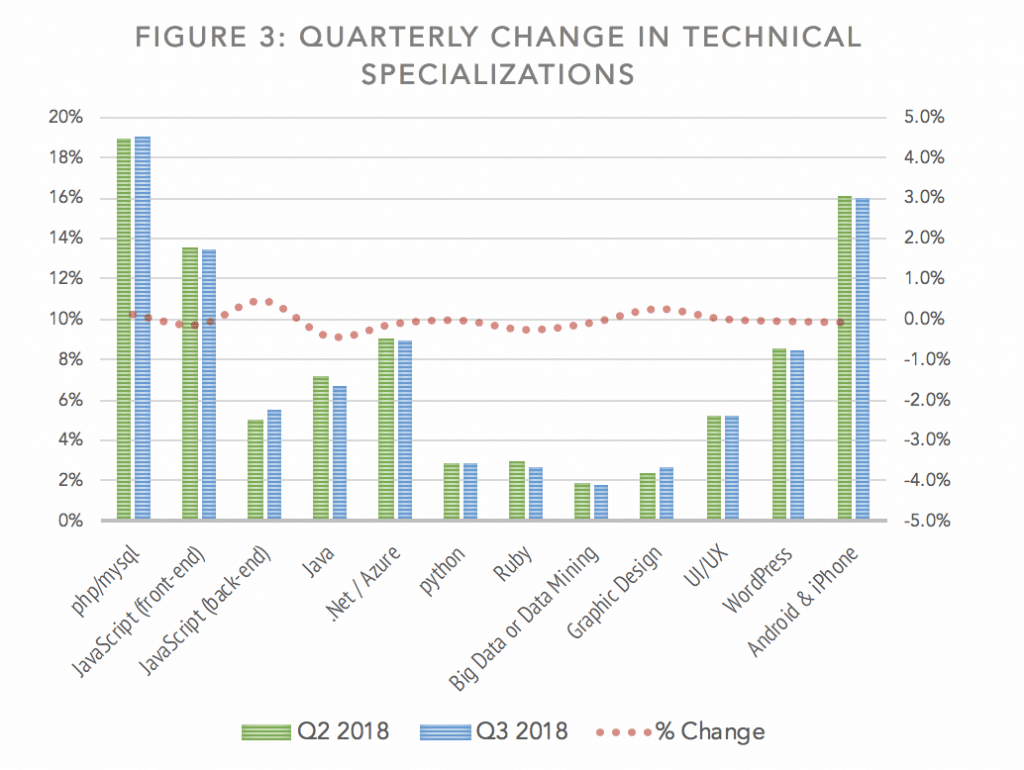 Our Take: In many Eastern European markets, particularly Romania and Bulgaria, larger companies are establishing large development centers. For example, in Bucharest big companies like Microsoft and Cisco are building huge offices. These larger companies are investing in data science and mining, leading to growth in our survey numbers.

Our Take: Real estate has been an explosion of new technologies and services of late, but it seems to be plateauing recently. There can only be so many Redfins, and Zillows, and there is a lot of consolidation in the smaller players. Thus, the market for developers maybe be soft right now, and in-between cycles.

The automotive industry is similar to Real Estate, expect for the beginning of the AI/autonomous driving race. As this gets fully underway many vendors in our network don’t call this ‘automotive’ work anymore. Instead, they call it AI or Machine Learning. In future iterations of this survey, we’ll explore which languages cross over with the ‘automotive’ industry not reflected in this survey data.

The below graph shows how average hourly rates reflect team experience. Unsurprisingly, prices increase as experiences increases. However, as seen in Figure 7, this is not true at the regional level.

Our Take: The regions with the most notable increases in prices as seniority increases, are North America, Western Europe, and South America. In contrast, pricing in Asia across experiences levels is extremely flat. This perfectly represents the market dynamics that dictate the whole world of pricing in the offshore software development. Typically, senior developers are in high demand and will cost more. Unless, of course, the market is super-saturated with them, which is the case in India (represented in the Asian region above). Additionally, India is seeing increased competition lately, so senior developers get priced down as the whole market gets squeezed.

Growth at SourceSeek
Dave Meyer is a data scientist, food lover, and an evangelist for offshore development.